Last year was a tough year for us.  We were building our new home which was every bit as stressful and painful as people who have gone before us have said. We faced betrayal and broken relationships with people we called friends.  We were tested at home in the way that can happen with family.  We were hit hard.  We felt broken.

But what made it even more challenging, is that I was confused.  You see earlier that year, I was confident that God had lead us to this very place.  I was confident that I had prayed for some of the very blessings that had us in this place of complete chaos.  And so I cried out,  “God, I don’t understand, did I hear you wrong?  Was I so motivated by my own wants that I missed where you were leading us?”

This storm has since passed.  We are now in our new home and like the birth of the child the labor pangs of getting where we are today are a distant memory in the glow of it’s blessing.  God once again came to our rescue, maybe not perfecting every situation like I had hoped, but He certainly made a way.

Last week I was reading in Mark 6:45-52NIV. It is a scene that many Christians have come to know well, Jesus walks on the water, but this morning something popped out at me.

45 Immediately Jesus made his disciples get into the boat and go on ahead of him to Bethsaida, while he dismissed the crowd. 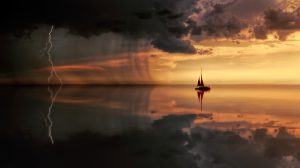 Sometimes we can begin to believe the lie that when we have God’s blessing, everything will go as planned.  We believe that God’s will for our lives means we are free from trials or hardships and most certainly heartache. We believe that if it gets too hard we have made a wrong choice or in my case, that I misinterpreted where God was leading.

But this is not the case. We serve an all-knowing, loving God, who is willing to make us get on the boat, that will face a mighty storm so that we can learn something about Him.

47 Later that night, the boat was in the middle of the lake, and he was alone on land. 48 He saw the disciples straining at the oars, because the wind was against them. Shortly before dawn he went out to them, walking on the lake. He was about to pass by them, 49 but when they saw him walking on the lake, they thought he was a ghost. They cried out, 50 because they all saw him and were terrified.

Immediately he spoke to them and said, “Take courage! It is I. Don’t be afraid.”51 Then he climbed into the boat with them, and the wind died down. They were completely amazed, 52 for they had not understood about the loaves; their hearts were hardened.

Jesus sometimes sends his disciples, his brothers, his friends into the impending storm. He allows the fierce winds and the fight against the raging waves to break through the hairline cracks of our hardened heart, so that we can see that Jesus is exactly who He says He is.

So that He can reveal to us something about His character that we have not known before.

So that we can be completely amazed.

Lord, thank you for having your way with my hardened heart.